Concrete, the city, and the impact on our habitats

While pondering the relation between concrete and cities, closeness to nature doesn’t exactly spring to mind. Quite the opposite: how romantic our country had been in the old days! Our ancestors lived in harmony with nature among fields, forests, meadows, and rivers and were surrounded by a sheer endless variety of the flora and fauna. Like in a Disney fairy tale, everyone was happy, joyful and content. Then came the modern times with all their side effects – and Earth became a Moloch of urbanization. Crammed with technology, concrete in every available area, and humans torn away from nature, the planet is doomed. Or so it seems, when dealing only in broad terms with the impacts of civilization. Modern times, seen as the beginning of the end, and concrete as a symbol of the pillaging of nature – it is tough not to surrender to the rampant doomsday fantasies of Judgment Day prophets and radical conservationists on the Internet, at the regular’s table, or on the street.

But did civilization truly got worse since humans massively intervened in nature? Among all the unquestionable negative repercussions of structural change, aren’t there also some positive effects of urbanization?

Although you have to look closely to spot the well-known silver lining amidst highways, brutalism architecture and a steadily growing world population, there is no doubt that it does exist. This text is dedicated to that precise silver lining.

Concrete in the city – Fuel for urbanization
In Germany, World War 2 – respectively its end in 1945 – marked a turning point in urbanism. Within a few years only, completely redesigned habitats emerged from the ruins of many formerly mediaeval cities. While only 30 % of the population lived in cities in 1930, 68 % already did in 1950. Currently, 75 % (and rising) of the German population are dwelling in the urban canyons of the metropolises. This trend of urbanization manifests not only in Germany: it is a worldwide phenomenon. It is believed that in a few years, more people will live in cities than in the countryside. Megacities, with a population of several millions, keep growing around the globe – in Germany, too, large cities on the Rhine, the Ruhr, the Spree or the Main are expanding into their surrounding areas. Where three-story houses once dominated the townscapes, high-rise buildings are towering, sometimes up to several hundred meters, into the sky.

No matter whether in Calcutta or in Korschenbroich: one companion is constantly close to provide the populations with roofs over their heads, to ensure transportation routes, or to turn cities into livable places. Our times cannot be imagined without concrete as an urban construction material, as only concrete creates the civilization as we know it, and that we learned to cherish.

The renaissance of concrete in modern cities
When the construction boom in Germany gained momentum during the 1960s, every until then undeveloped urban area got plastered with domestic buildings in no time. As counterpart to the stern hierarchic architecture of the Nazi period, a supposedly more democratic and open type of construction was opted for. In those days, buildings made of “raw concrete” were a perfectly suitable housing design. But only a few years later, brutalism architecture (as this construction period is also called) was considered ugly, unlivable and fit for demolition. What’s more, the former utopias degenerated into eerie places – whoever went to the university of Bochum has heard the tales about an unusually high suicide rate in “Germany’s ugliest concrete bunker”.
With the beginning of postmodernism, on the verge of the globalization and side by side with the introduction of a “new religion” called neo-liberalism, the time of urban concrete architecture was seemingly up for good. Concrete buildings yielded to smooth and glossy glass facades, and where windows once provided a view of the outside world, there were suddenly embrasures, in the like of arrowslits, at best letting in only an idea of nature through the inner-city granite fronts.

Interestingly enough, the architectural “neo-liberal coolness” is currently losing ground again, in favor of old-school concrete. People are gathering on social medias to praise the aesthetic qualities of functional buildings from the 1960s. Groups with over a thousand members do not only exchange views, but instigate “rescue actions” for brutalism architecture. In 2013, one group succeeded in saving the Prescott bus station in Lancashire/England from demolition. It is not surprising that this bus station since has its own Twitter account.
Source:
https://www.monopol-magazin.de/schönheit-und-zerstörung-0

Concrete in the city creates new plant species
It sounds like a paradox: more and more open spaces are getting built-up due to urbanization, whereas the number of plant species is steadily increasing. Shouldn’t the exact opposite be expected? After all, herbs cannot thrive on concrete, right?

Scientists from the German Center for Integrative Biodiversity Research and the Helmholtz Center for Environmental Research have devoted themselves to this precise issue. Taking the example of the city of Halle (Saale), they evaluated existing data from three centuries – with amazing results! Thus, the number of native urban plant species had massively increased between the 17th and 21st century, namely from 711 to 860 species. At the same time, however, the variety of plants had declined, as many of the new species are related to each other. Those that have been left stranded and have disappeared from the cities are, above all, plants that require cool, damp places to grow. The scientists mention clubmoss as an example. These plants couldn’t keep up with their altered living conditions amidst steel and concrete – and had to yield to other plants that were much better adapted to urban life. A striking feature of the study is, that it were indigenous species in particular that had lost the habitat competition.

Is this decrease of diversity a major problem then? The fact remains, that it is precisely diversity that provides ecosystems with much-needed stability. Another fact is, that evolution always seeks a way to have organisms adapt to altered living situations.
Source:
https://www.mdr.de/wissen/urbanisierung-108.html 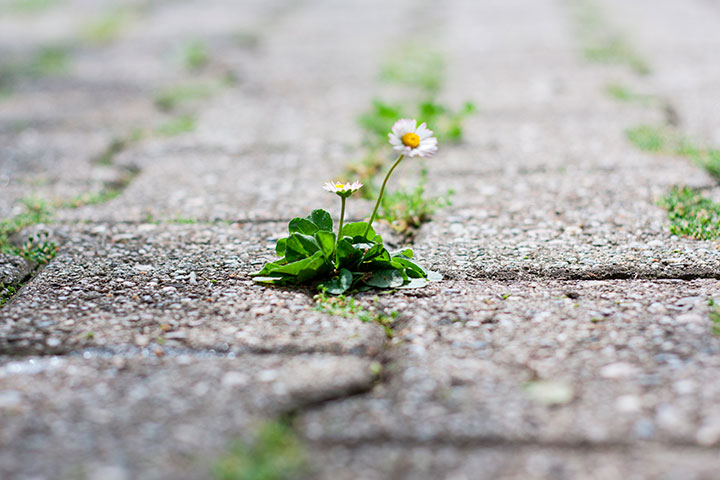 The use of concrete as creator of new urban species
Evolution involves the extinction of species, as well as the development and the specialization in new habitats. Urban habitats are clearly among the factors that spawn new species. An amazing example of how a completely new species has been created by the use of concrete is Culex Pipiens, otherwise known as the “common mosquito”. These tiny pests can be found throughout the European continent – and therefore also in London. The city of London is not only known for the Queen, its taxis and Big Ben, but also for the “Underground”, its local subway network. Decades ago, a population of mosquitoes had settled in the dark maze of reinforced concrete and bricks – and obviously felt so comfortable in the subway that none of the mosquitoes was ever drawn back to daylight. Over time, the population had adapted so perfectly to life underground that over generations, genetic mutations had evolved. This evolution of their genome had the effect that the underground mosquitoes could no longer mate with their relatives above ground. A new, independent species had emerged, and even got its own name: the London Underground mosquito.

Nature’s high adaptability to habitats transformed with concrete by humans is also noticeable among our feathered friends. Animals – in our example, birds in particular – have to adapt to new, man-made environmental conditions not only physically, but also psychologically. Turdus merula, the common blackbird, is, initially, a very reclusive forest dweller. However, there are much less forests than built-up cities – but this doesn’t bother the blackbird, indeed one of the most common urban bird species. While wild blackbirds are extremely curious about new and strange objects, city dwellers are rather cautious and lay low. Also, urban blackbirds migrate significantly less often to the South in winter, start breeding earlier, and live in a closer relationship with their own kind.

Researchers still cannot provide a clear explanation for the differing behaviors of urban birds and their woodland peers. But they suspect that it is related to the fast-moving urban world and the ever-changing conditions that urban birds differ so fundamentally in behavior from their relatives in the forests. It appears that evolution has favored the emergence of certain personality types in urban environments. 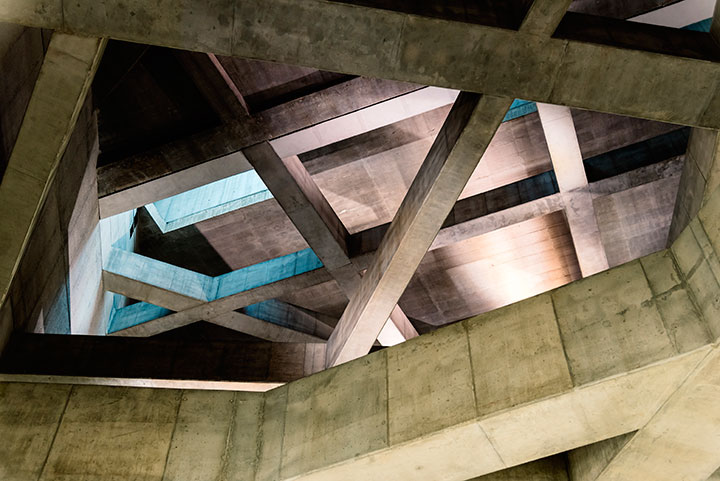 Concrete: Number one in the city, also in the future
Whether we want to see it or not: mankind is ousting nature increasingly. With sad after-effects. Biodiversity is decreasing, forests are disappearing, and soon there will be more plastic than fish in our seas. We can either shut our eyes, or face the challenge and, against all odds, give the planet a livable future through innovative concepts.
The construction industry is right there at the forefront of innovation. For precisely in concrete, the age-old building material, lies a lot of potential, also in terms of decreasing environmental pollution in our habitats.

Major debates among lobbying associations, politics, and the automotive industry are currently triggering the high levels of nitrogen dioxide pollution in our cities. While automobile manufacturers prefer to comply with the threshold by attempting software manipulation, ​​and politicians outdo each other with inefficient sets of measures, the construction materials industry displays a much more pragmatic approach. For example, the Dinslaken-based company STEAG Power Minerals GmbH has developed a concrete admixture that converts nitrogen dioxides into non-toxic nitrate, by exposure to light and the resulting photocatalytic reaction. The additive can be admixed as powder to the concrete. A truly innovative concept that earned the company the coveted Green-Tec Award in 2016.
But there is more to the innovative power in the concrete sector. Long gone are the days when concrete was a mere mixture of cement, water, and gravel. Currently, nanoparticles or renewable additives, such as bamboo, confer high malleability, stability and longevity to the construction material. Furthermore, one of the major problems in the concrete industry is slowly, but steadily, eliminated: the significant CO2 emissions during production. Currently, concrete production is still accountable for up to 12 % of the annual CO2 emissions worldwide. However, this will change in the future, as, with the development of “Ultra High Performance Concrete”, UHPC for short, a concrete type is available that not only saves 50 % of material but is also to last twice as long as conventional concrete. With UHPC, a worldwide CO2 saving of 40 %, compared to the current numbers, ​​can be considered as realistic.

Due to additives to the initial mix, it is possible to no longer construct solely bulky buildings in a city, but also the most delicate bridges, floating roofs over train stations and exhibition halls, or high-rise buildings, towering more than 1.000 meters high into the sky.

There is no doubt that humans are shaping nature according to their desires and thus intervene massively in the present ecosystem. But unlike the often propagated mantra suggests, structural change in our environment isn’t a great danger alone. Old things are gone, news ones are born – true to this saying, not only plants and animals, but our building materials are adapting to altered living conditions, too. What underground life is to the common mosquito, and the city is to the blackbird, such is urbanization to concrete: a driving force for evolution and development in a positive sense.

Read more about concrete:
Part 1: A little history (of success) of concrete