What exactly is a foundation?

In construction, the term foundation, derived from the Latin word fundus (subsoil), refers to a part of the general establishment. A foundation consists, depending on its purpose, of different elements such as beams, stones, slabs or piles. In modern construction, a foundation is usually made of reinforced concrete.

What is a foundation needed for?

Foundations are used to attach light or delicate structures to a solid support. In order to fulfill their function, foundations have to be more rigid, heavier and stronger than the elements attached to them. Foundations suppress the movement or the deformation of the attached structures and prevent ground seepage. Furthermore, foundations are considered as interface between different functional and structural areas.

What are the different types of foundations?

When selecting the appropriate foundation in house or road construction, three types of foundations are mostly considered. Besides strip foundations and raft foundations, pad foundations are often used, too. No matter which foundation is chosen in the end, its purpose always stays the same. A foundation is to evenly distribute the weight of walls or structural components to the ground. Hence, the soil properties take also part in determining the foundation’s prerequisites. The softer and the more yielding the ground, the higher the requirements laid upon the foundation. Fundamental to any foundation is a frost-proof design. In Central Europe, this indicates a minimum depth of 80 centimeters. 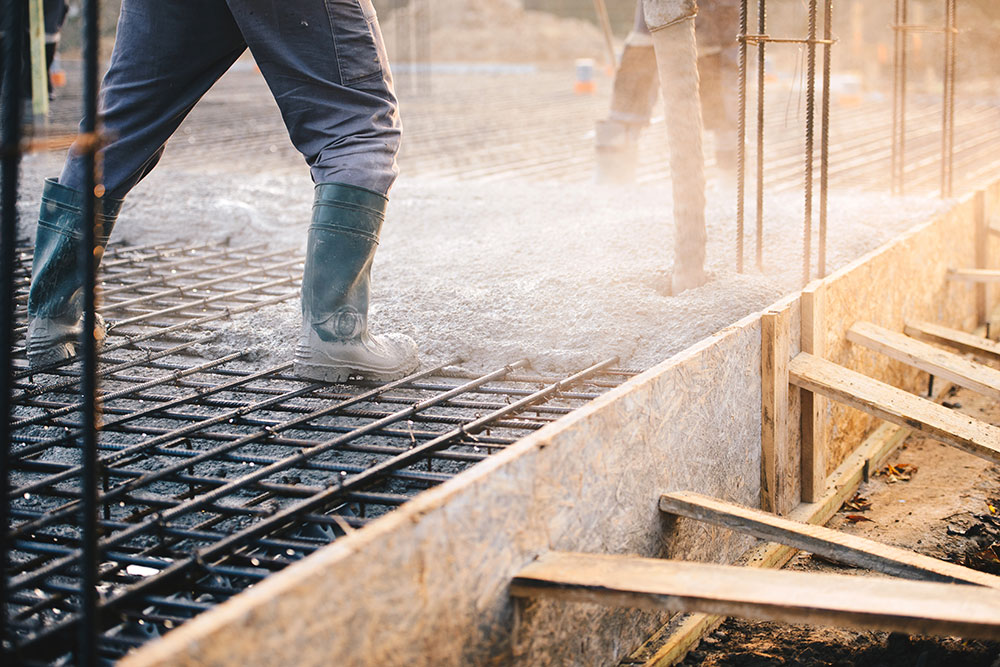 What is a strip foundation?

A strip foundation is an absolute classic among all the foundations. Strip foundations are built along the ground plan of a house and the path of the supporting walls that will rest on them later. The amount of steel reinforcement is determined depending on the type of subsoil. The design of strip foundations is always based on statics calculation. In the past, the masonry was built straight on the strip foundation. Today, this is done in a more functional way: by equipping the foundation with insulating and damp proof floor panels first. Only then the actual masonry is built. Those floor panels are thin by comparison, and are steel-reinforced and non stress-bearing only to a small extent.

And what does raft foundation mean?

Raft foundations, on the other hand, can be understood as end-to-end supporting layers. They simultaneously cover all their statics requirements and assume the insulating and damp proof functions of a floor panel. The thickness of a raft foundation is determined by the nature of the subsoil and by the volume of the loads that are to be supported. Raft foundations can be built quicker, and thus cheaper, than strip foundations, which entirely outweighs their disadvantages, such as higher costs for steel reinforcement and the quantity of concrete. If non-basement constructions are to be provided with a raft foundation, however, an adequately deep establishment and, under certain circumstances, the use of frost protection have to be borne in mind. In civil engineering, frost protection denotes a narrow strip foundation which has, however, no steel reinforcement.

When are pad foundations used?

How does gravel affect the foundation? 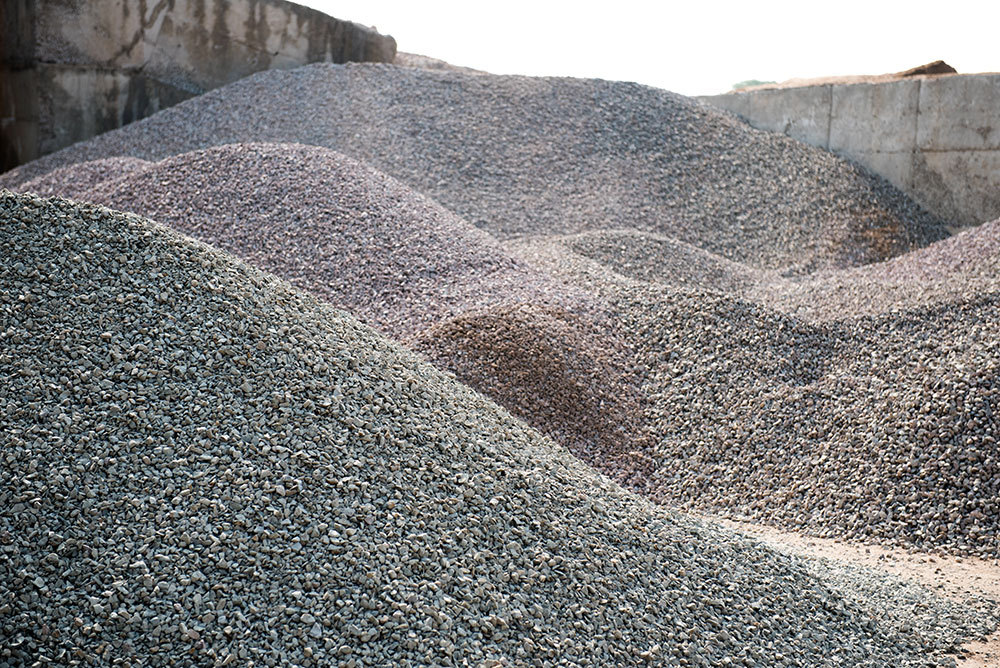 Which grain size does gravel have in foundation construction?

Of course, the grain size, i.e. the size of the individual pebbles, always depends on the type and the purpose of the foundation. Therefore, the values mentioned herein are only intended to be a rough guideline.
For a gravel layer under a foundation, a grain size of 16/32 mm is generally recommended. However, a coarser grain size of up to 45 mm can easily be used here as well. It is a different matter with the aggregates in concrete. Here, a grain size of 0/16 or 2/16 mm is required.

What is core drilling, and what is it needed for in a foundation?

If an existing foundation is to be enhanced with elements that were not intended in the initial plan (bollards or fence posts, for example), it has to be provided with core bores. In core drilling, the drill core remains within the drill bit, unlike in regular drilling. This allows for faster propulsion and less wear on the tool.
Core drilling in concrete requires special drill bits. These are, in general, set with industrial diamonds, able to penetrate hardened concrete. In order to convey the ablated material from the drilling gap as well as to cool the drill bit, it is almost always water that is used for rinsing while core-drilling deep in concrete. Core drilling is comparatively quiet and vibration-free. While minor core drilling can be carried out autonomously in existing buildings, a structural engineer has to be consulted before working on the foundation of a house. 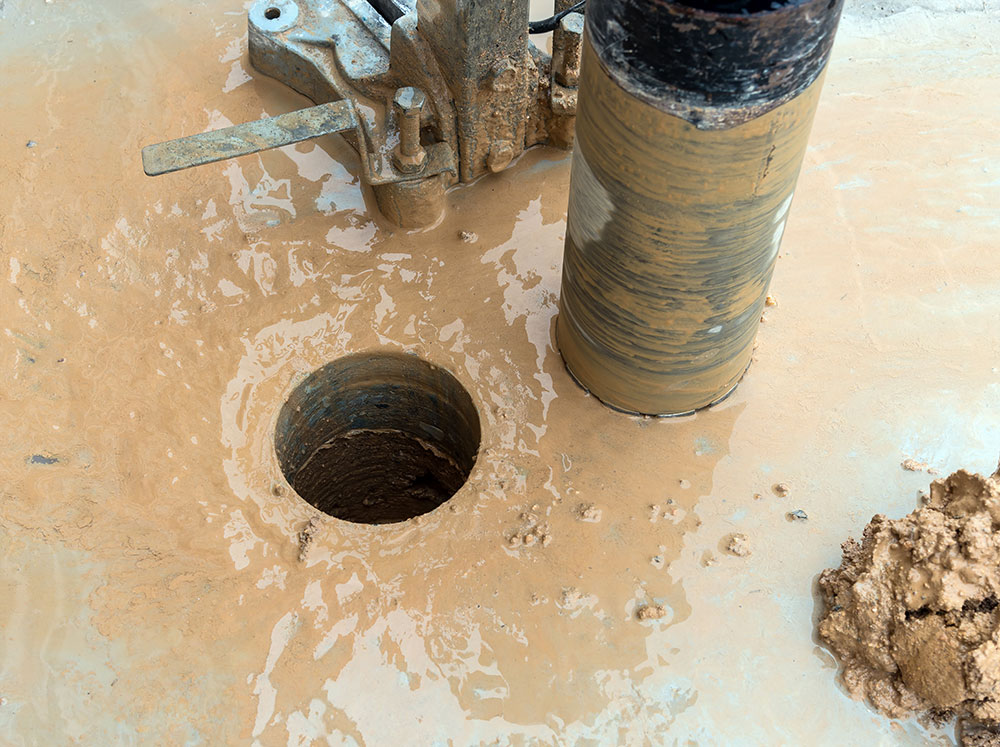 Why is reinforced concrete almost always used for a foundation?

Concrete can only absorb high pressure forces. When tensile stress occurs, concrete is rapidly at the end of its performance. Steel, on the other hand, has completely opposite properties – and is therefore the perfect complement. By equipping concrete with steel – experts use the word reinforcement – the tensile load capacity of concrete is significantly increased. The combination of the two materials ensures a balance of power and increases the durability of a foundation.
For reinforced concrete to reach its full potential, microscopic cracks have to form in the concrete. Therefore, a balanced ratio of steel and concrete, as well as the correct diameter of the steel reinforcement, is crucial for the perfect reinforced concrete!
To allow a better transfer of the occurring forces from concrete to steel, the latter is ribbed. These ribs ensure the perfect interlocking of steel and concrete – and thus the desired power transmission.
Steel for concrete foundations is available in different forms. Steel can be embedded into concrete either in form of rods, meshes, or frames.

What does concrete density have to do with the foundation?

The denser the concrete, the higher is its compressive strength. The so-called bulk density of concrete is determined by the choice of supplements – components that are added to the concrete. The most common types of supplements are standard aggregate, lightweight aggregate, and heavy aggregate.
In the case of standard aggregate, a mixture of gravel and sand, originating from rivers or quarries, is added to the fresh concrete. Standard aggregate provides a concrete density between 2.0 and 2.6 tons per cubic meter. Light concrete, on the other hand, achieves a maximum density of 2.0 tons per cubic meter. For light concrete, lava, pumice, or expanded clay pellets are used as supplement. Lightweight concrete has strong insulation properties and can significantly improve the energy balance of a house.
When heavily loaded foundations are to be built, extremely pressure-resistant heavy concrete is employed. Its density exceeds 2.6 tons per cubic meter. Scrap metal, blast furnace slag, or similar heavy material is commonly used as heavy concrete supplement. By the way: since heavy concrete is also used for the construction of strongrooms, its colloquial name in German language is “Tresorbeton” (strongroom concrete).