How public property can be protected against deliberate damage 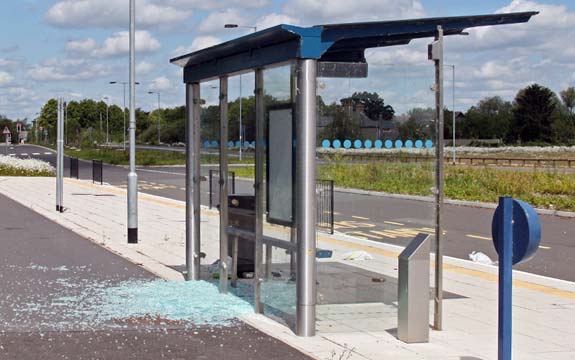 Wrecked park benches, smeared walls, knocked over traffic signs: vandalism remains a major problem for many public administrations. For one thing, property damage increases the public risk of injury. On the other hand, affected areas become discredited quickly and are turned into significantly less attractive residential zones. Especially in times of empty state treasuries, property damage is primarily a financial burden that cities and communities have to struggle with. But there are measures able to prevent vandalism.

By the time a new bus shelter is set up, it is already full of graffiti. Particularly children and adolescents are disproportionately often the perpetrators of vandalism – boys more likely than girls. The triggers for destructive behavior are manifold: frustration, boredom, or the influence of alcohol and drugs are possible reasons. Monuments are defaced, walls sprayed, toilets smeared. The problem is: these damages can not only rapidly become a danger to the general population; mostly they are a major financial nuisance for the affected districts.

Vandalism can occur in many forms, yet it is not a clearly defined term in criminal law. It mostly associated with the pointless damage or destruction of third party property and is frequently considered as property damage offense. As a result, vandalism of any kind is one of the most frequently committed offenses in Germany. Small and mid-sized communities as well as cities with up to 100,000 residents in particular have to deal with this problem.

From shards of glass in sandboxes to smeared traffic signs to damaged construction site covers – with the destruction of public property in particular, innocent citizens are at a serious risk of injury. Local authorities and cities have to act quickly to avoid major accidents. This does not only imply administrative efforts but also a considerable financial burden. Therefore, vandalism should be mitigated beforehand as much as possible: prevention is definitely better than cure. 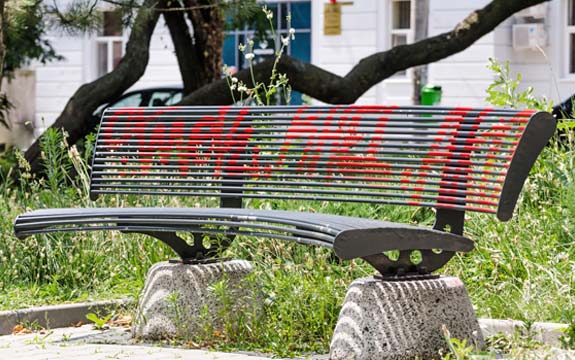 The background of vandalism

In order to find suitable measures against vandalism, it is necessary to take a closer look at the background of this destructive behavior first. There are several possible causes. Property damage offenses often happen out of boredom: the perpetrators don’t know how to keep themselves busy, hang out on playgrounds, in parks, or at bus stations and act out of monotony. The destruction of public property offers a welcome change to everyday routine, but often happens from within a group.

On children and adolescents who, as mentioned before, become disproportionately often the perpetrators when it comes to property damage offenses, the need to “fit in” has a stronger impact than on any other groups of offenders. Then, vandalism is not an individual’s act but is committed in unison by multiple members of a group. Alcohol and other drugs may significantly contribute, since criminal inhibitions are noticeably lowered by substance abuse. They may also be the key for dares, where mostly male children and adolescents are involved. The deliberate destruction of third party property further appears to be an escape from monotony, but can also be interpreted as a juvenile act of showing off.

Another possible trigger for vandalism is frustration. Anger and disappointment are unloaded by damaging property; vengefulness can lead to the destruction of public property, too. Especially in areas already affected by vandalism, the Broken Windows Theory is confirmed: according to this concept, property damage inhibition threshold is dropping where objects are already significantly destroyed. Meaning: an already sprayed wall is more likely to attract copycat offenders. This also may – especially with the residents of affected areas – result from general feelings of frustration.

Tackling the roots of the problem
As described, vandalism has many different causes, often influencing each other. Hence, cities and local authorities have different options, depending on the trigger, to address the problem. In many places boredom and the ensuing destructive behavior can easily be prevented by creating a diverse recreation program for children and adolescents and by providing suitable premises. While this implies administrative and financial efforts by the affected areas, it usually pays off as the potential cleaning and repair costs would be eliminated. As a positive side effect, this also contributes to the appeal of residential areas in cities and communities. Therefore, this measure has a dual advantage.

In some areas, the deployment of patrons has also been proven successful: the public is actively involved in the prevention of property damage or the reporting of damage. Selected individuals are given the role of a playground or park patron and thus feel responsible for these areas. Accordingly, the residents themselves take care to ensure that offenders and damage are rigorously reported and denounced. In doing so, based on the Broken Windows Theory mentioned above, a zero tolerance strategy is pursued, to make it as unappealing as possible for potential offenders to actually commit crimes. Information events and educative talks in schools can also contribute to a decrease of vandalism, by highlighting the consequences of the damage.

Another option against vandalism relates to the design of public space. With street furniture in particular, administrations should use high-quality and robust materials instead of relying on the most economical solution. Selected types of wood, steel, cast iron, and cast aluminum are particularly suited. The furniture can no longer be easily damaged and has to be less frequently replaced or repaired, thereby cutting costs considerably in the long term. Special attention should also be given to the object design, in order to increase the inhibition threshold of potential perpetrators.

To prevent graffiti, a protective coating can be applied to facades at risk; without protection, the removal of graffiti can be very expensive. This measure shortly pays for itself when in the past multiple damages caused by sprayers have already occurred. Motion detectors and green walls are further options suited to prevent graffiti. Equally beneficial is the swift removal of the illegally applied patterns. Copycat offenders won’t be drawn to it and the thrill of spraying is gone when graffiti is visible for a short time only.

Alcohol bans in public places and increased police controls in affected areas are effective ways to lessen the number of property damage cases. The installation of surveillance cameras or alarm systems can also pay off in some areas, but commonly, this option is implemented only partially or not at all, because of the high costs involved.

If, despite all the measures taken, vandalism still occurs, the affected furniture should be repaired, cleaned or exchanged as soon as possible or copycats will have an easy time. The focus should not be on the expenditure for street furniture maintenance, as it only increases over time the more objects are affected. This applies, of course, in particular to damage certain to endanger the general public. Such hazards have to be addressed promptly by the local authorities and cities to guarantee the protection of the population.

The fact is clear: vandalism is difficult to fight, and mostly only with a relatively large expenditure. However, in frequently affected areas the potential savings, compared with the costs for repairs, cleaning and new acquisitions, rapidly become evident. In order to keep cities and communities livable and safe, property damage should not be trivialized. A zero tolerance strategy is therefore appropriate to rigorously prevent vandalism offenses. 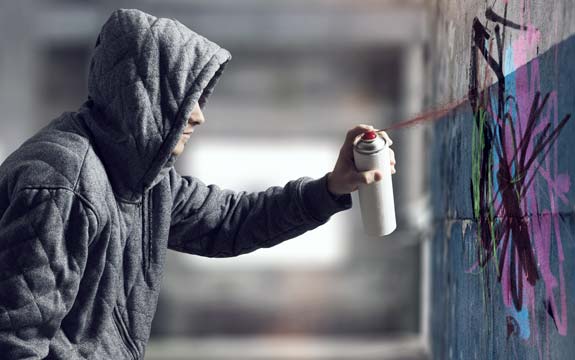 Measures against vandalism at a glance