Cities are, in most cases, grown structures. What often appears to be arbitrary and random in the overall picture is a series of changes which were, at the time of their implementation, a reasonable intervention in the existing urban structures – always according to their conditions, requirements, and possibilities.

In recent years, urban space has been the focus of urban planning considerations, taking into account very different interests. Not always do the planned changes relate to functionality or aesthetics. One essential aspect is the identity that the residents get from “their” city and that they in turn give back to it. Urban identity is what connects people to a certain place. But like the cities themselves , the identity has grown, is constantly changing and is by no means homogeneous.

Identity, a part of urban planning

Identity, a part of urban planning

As complex as the overall structure of a grown city is, the task of planning and designing changes and transformations under such conditions is also very complex.

The different dimensions of urban planning

The first intricacy can be found on a linguistic level, because a distinction has to made between urban planning and urban development. The latter is not exactly self-explanatory as it contains a multitude of aspects. It is about all the processes within an urban space, which indicates the scope of the terminology.
Urban development thus encompasses spatial, demographic, economic, and social processes as well as their effects on the structure of a city. Hence it is absolutely legitimate to speak of urban development in different contexts:

Already from this short reflection on the concept of urban development, different dimensions can be identified. The most obvious, because visible at all times, is the structural and spatial dimension where the growth of a city manifests itself. Hardly less important and inseparable from it are the functional dimension – How are urban spaces used? How could they be used? – and the social dimension, that is to say, the multiple facets of “urban life”.

In the following, the focus is on the planning idea, although the transition to other meanings of urban development is smooth. To what extent can be seen by looking at the different perspectives specific planning projects have to follow:

But it is not yet clear what actually defines urban identity. Although the urban landscape, with its remarkable buildings and monuments, is not without significance for the unique “character” of a city (think of the world’s metropolises and their landmarks), its identity does however not only derive from its architecture.

The different dimensions of urban identity

Also, the identity of a city does not only have an external effect, as it easily would if reduced to its structural image. Urban identity is largely an inward phenomenon that connects people to “their” city. What could be named the “essence of the city” has become, for marketing purposes, the “image”, the reputation that the city has with its residents and visitors.
But that doesn’t really explain the concept of urban identity either, because it is the sum of several different factors:

In a workshop report on the processes of identity formation in so-called grätzeln (Austrian term for a part of a residential district), the OPK (Offenes PlanerInnenkollektiv), an Austrian association for landscape planning, art, culture, and environmental pedagogy, refers to the three levels which play a role in the formation of identity relating to a particular area, in this case an urban area.

The result of the OPK study on the relationship between space and identity is unambiguous, because (public) space obviously contributes to the identity formation.

Feeling at home in the city

What defines urban identity also applies to the sense of home that is connected to a particular city. At least the conditions are very similar regarding the subjective perception and the social construct. Furthermore, sense of home and identity have to be constantly checked: the historical dimension of urban development suggests that city, identity, and sense of home are subject to constant change.

The loss of historical buildings as a result of urban planning restructuration is such a change. Sometimes it means that familiar symbols change, that they and important identification points are lost. However, these aspects are immensely important for the connection of people to their place of residence – albeit in very different ways. 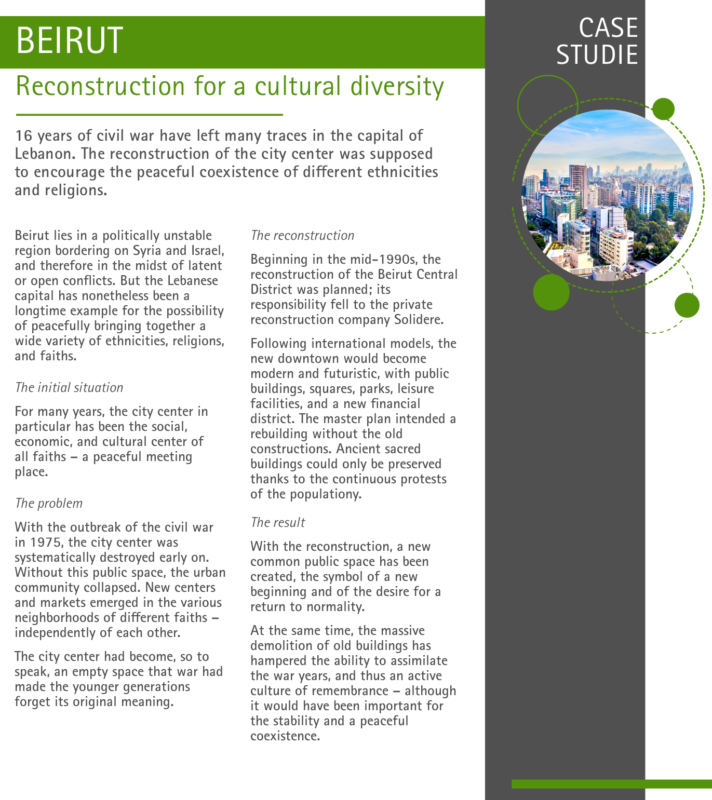 This happens in particular when the ideas of different generations collide: notably on what makes their city their home and on what its identity is based. A classic example of this dilemma are the many debates on the reconstruction of historical buildings, like the prominent rebuilding of the Berlin City Palace.

The desire to reproduce the image of the (historical) center of Berlin has been controversially debated. Critics accused the project of Historicism, of reviving the Prussian regime, which stands in stark contrast to the modern democracy. Not to forget the dealing with the past of the GDR, which, with the Palace of the Republic, had already had to give way at the same location and which is now simply overbuilt with a baroque monument.

However, the palace’s rebuilding was scheduled to end in 2019 (2020 for some areas), and the controversy of its significance for the identity of Berlin (and Germany’s self-concept) is unlikely to end. But this is also a part of the search for identity. Home, as the example shows, is always in the eye of the beholder and is associated with a wide variety of emotions and ideas. For urban planning, this will always be a great challenge.

Identity creation on a “small scale“

What should not be forgotten in the light of these “big” debates with a superregional impact: identity development happens much more often “on a small scale”, in manageable urban areas. An increasingly important factor are neighborhoods that already have a unique structural character for historical reasons – among others the settling of certain professions in one place, etc. – and also differ from each other in many other ways.

They are so important because they are often the immediate reference points for identity formation. Here, people live, work, and communicate: the easiest way to create a sense of community. Here, simply because of its narrower limits, urban development is easier to direct towards the people’s needs. What is notably due to the fact that this development is, in many cases, driven by the neighborhood residents themselves.

Urban planning and identity sometimes have a complicated relationship, which is mainly due to the fact that urban identity is always looking back: on what has been and on what has made the city what it is today. Urban planning, however, focuses rather on the present and even more on the future and is frequently challenging the past.

Naturally, this is leading to many debates as the redesigning plans for the historical center of Berlin or the fate of the “Institut für Lehrerbildung” in Potsdam are showing. Undoubtedly, a city and its image have a function of historical memory which plays a role in the formation of identity. At the same time, this image has emerged from an eventful history and has been subject to numerous changes.

Cities: Children of their time

Urban development is always targeting the current issues and, considerate of the future, tries to solve them as sustainably as possible. However, this can only succeed if there is a basic understanding of the grown structures on the one hand and of the social contexts on the other. The issue is that the present residents cannot always fully trace the long lines of evolution, even when they are strongly identifying with their city.

However, this does not mean that German cities are not aware of their past. The latter is tightly linked to their identity: in many German cities, the medieval and the early modern heritage is certainly still present; sometimes even the classical roots.

But this does not change the fact that all these cities have undergone significant transformations, because they always had to face the troubles of the respective eras. The delicate balance between necessary renewal and expansion on the one hand and the preservation of what has grown on the other is a recurring theme, as are growth and decay.

Industrialization: From cities to metropolises

In the era of industrialization, towards the end of the 19th century, many cities saw rapid growth when they evolved – late but quickly – into large industrial centers. The first metropolises brought new structures – and new problems: working-class neighborhoods appeared alongside industrial zones; significant differences between center and periphery began to stand out, especially on a social level.

Social, hygienic, and infrastructural problems made it necessary to intervene in the development of the city, for example to guarantee the supply of water and energy or to install sewage systems as well as roads and various forms of mobility, etc. The city was increasingly understood as an entity that could only function through an all-encompassing planning. The begin of the 20th century heralded a period of considerable modernization in many domains.

Most of these achievements were lost as a result of World War II. After the end of the war, urban development meant rebuilding. On the construction level, the concept of a structured and lightened city with many green areas was encouraged, while the functional level was characterized by decentralization. From the early 1970s, government agencies moved to Bonn, Hamburg and Düsseldorf became trade centers, Frankfurt became a financial metropolis, and insurance companies, culture, and the media settled in Cologne and in Munich.

Overall, as a result of the economic boom and the faith in technical progress, a change was happening in the cities, especially downtown. Densification and commercialization, contemporary and car-friendly buildings were the defining themes of urban development. It was the time of suburban homes and Plattenbauten.

In the recent past, the lack of housing in cities and the demand for jobs have played an important role in planning and designing the city of tomorrow. In addition to the metropolises, the young generations’ choices of residence have led to the creation of so-called trendy cities. Cities that are attractive enough for people with the same interests and ideas to settle there and to significantly increase the number of residents.

For the development and the planning of these cities it is therefore important to work out their particular strong points – as digital, scientific or technological sites. After all, it is also important to attract skilled workers needed by the local economy. Identity and image will therefore have to be adjusted to these aspects.

Reconstruction and historical heritage as foundation of urban planning

Today’s planning issues often focus on finding solutions for affordable housing, while in rural areas the number of vacant units is increasing. Urgent problems require quick responses. The need for conceptual and recognizable values must hence give way to the quickest possible implementation and to the economic interests. 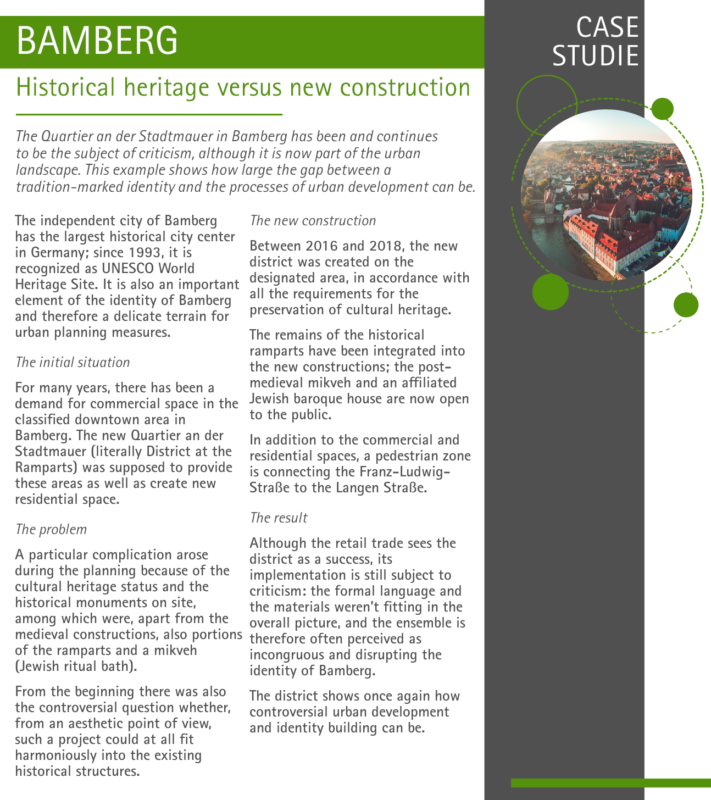 In 2019, the 100th anniversary of the Bauhaus showed what sustainable architectural solutions can look like. Although a century old, the Bauhaus school creations are still considered modern as well as timeless. This gives them a considerable advantage over much older buildings which are difficult to maintain and to integrate into a contemporary urban development.

It is important to not only focus on the cultural merits of architecture, but also on its ecological and economic values. It is an important resource; on the one hand to meet the needs of growing cities and on the other hand for the identity of these cities. Old structures have a great potential to play a role in shaping the future of a city: by emphasizing larger structures and landmarks, by ensuring diversity, by saving resources – and of course by preserving the city’s character, its identity.