The necessity of safe and comfortable concepts

Many cities and municipalities have been struggling for years with a growing volume of traffic. Promoting bicycle traffic is a possibility to reduce road congestion – combined with structural changes. In order for urban cycling to become safe and a true alternative to motorized private transport, the cycling infrastructure has to be adapted to its special needs.

The number of registered motor vehicles per household has grown steadily in recent years and decades. In 2010, 527 out of 1,000 inhabitants had a car; in 2019, the number had already risen to 692 – according to the data from the German Federal Motor Transport Authority. For a long time, the infrastructure in most German cities has been geared mainly towards motor vehicles. In addition to the expansion and new construction of roads, this also includes the creation of parking zones – mostly in public areas.

A car is a comfortable solution for private transport and offers maximum flexibility. Public transport, on the other hand, is often considered less attractive. Rigid timetables, compulsory stops, and poor connection options but also safety and comfort issues are some of the criteria which are often mentioned. As a result, less frequented connections have been systematically deleted in some cities.

In German urban development, cycling infrastructure has only recently begun to be taken into account to a greater extend. The existing routes are in most cases only partially developed.

However, the transport infrastructure in many cities and municipalities is now reaching its limits. The cause of the various problems in daily city traffic is above all the ever scarcer space combined with the growing number of vehicles of all kinds.

Also these days, there are more and more cyclists on the roads. For many reasons, promoting cycling is considered one of the possible solutions for a sustainable mobility in urban areas. In addition to the lesser space requirement – for driving as well as for parking – its environmental friendliness is an important argument. Where motor vehicles are stuck in congested streets, a bike can still get you quickly to your destination. Especially on short distances, the driving time is almost the same compared to motorized traffic.

While many like to use their bikes in summer when the weather is nice, things look very different when the weather is bad. Rain, or even snow and ice in winter, not only reduces the comfort; the risk of road accidents increases notably on slippery roads. Also, a simple bike is suited only to a limited extent for the transport of shopping bags or large pieces of luggage. Cargo bikes, which can be seen increasingly in larger cities these days, can fill this gap.

But these vehicles require significantly more space than regular bikes – the same goes for trailer bikes. Concepts that focus on expanding urban delivery traffic with according bicycles have to take this aspect into account. In Berlin, within the framework of the KoMoDo project, delivery traffic with cargo bikes is currently being tested, in cooperation with the five largest parcel services. After a positive interim assessment, the project had initially been extended until the end of 2019.

Requirements for a functioning cycling infrastructure

Cyclists, however, have different demands on the infrastructure. They are often stuck between heavy traffic on one side and crowded sidewalks or parking strips on the other side. In cities with a low share of cyclists in the global traffic, they often have to stand their ground vigorously. However, this is not just about the structural requirements for safe and rapid progress, but also about acceptance as an equal road user.

Security as a key criterion

On the roads themselves, cyclists are the weakest link among road users – except for pedestrians. Bikers are confronted with faster, larger, and stronger vehicles, and they do not have a metal casing or a crumple zone that would protect them from injuries in a road accident.

If cycling is to be encouraged, safety has to be a very important issue. According to surveys like the “Fahrrad-Monitor” (2011) or the „Fahrradklimatest” (2018), many cyclists do not feel very safe in traffic – a fact often related to the lack of cycling infrastructures. Possible solutions are at times discussed in a very controversial manner. Distinct bicycle traffic facilities – conceivably separated from motorized traffic lanes – are often not feasible due to the lack of space. If car lanes are to be rededicated for this purpose, their respective occupancy rate must be taken into account.

Overview of the various bikeways 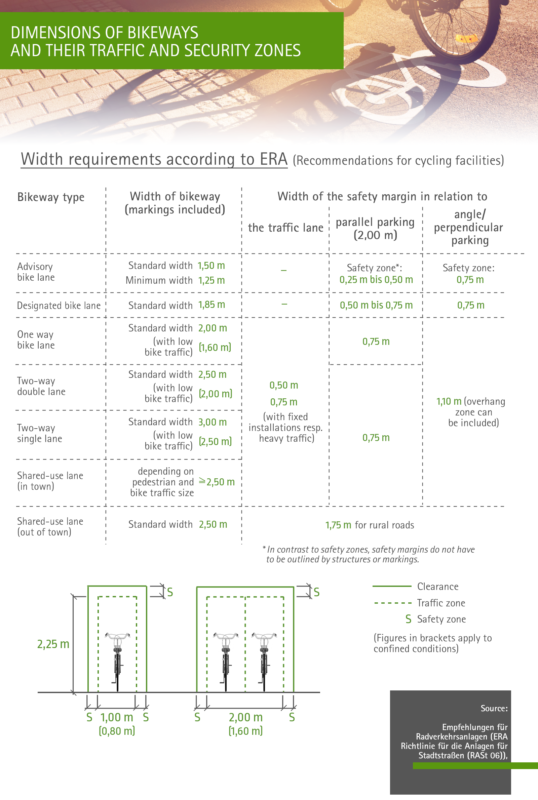 The narrower variant, the so-called advisory bike lane, is particularly controversial. These lanes are indicating a “special” bike traffic zone, but – unlike “real” bike lanes – their usage is not mandatory for cyclists; also, their width is limited. They offer cyclists significantly less space and therefore less protection against passing vehicles. Furthermore, advisory bike lanes are often close to parking strips, hence, within the markings, cyclists drive below the required lateral distance from parked vehicles.

Another problem: bike paths and lanes are often blocked by other road users and misused as parking opportunity. Also construction sites, garbage cans, and trash frequently make the paths impassable and sometimes force cyclists to spontaneously change to other traffic zones. These changes in particular increase the risk of road accidents.

Although the massive expansion of a special bike infrastructure entails a safe and faster progress, it generally takes some time before the switch from car to bike becomes noticeable in the overall traffic. A good and consistent infrastructure fosters the “perceived safety” and can encourage more people to get on a bike. Here, it is important to carefully consider which remodeling measures will have the best effect.

Different traffic situations, often depending on the infrastructure and the respective structural conditions, pose an increased risk for cyclists: 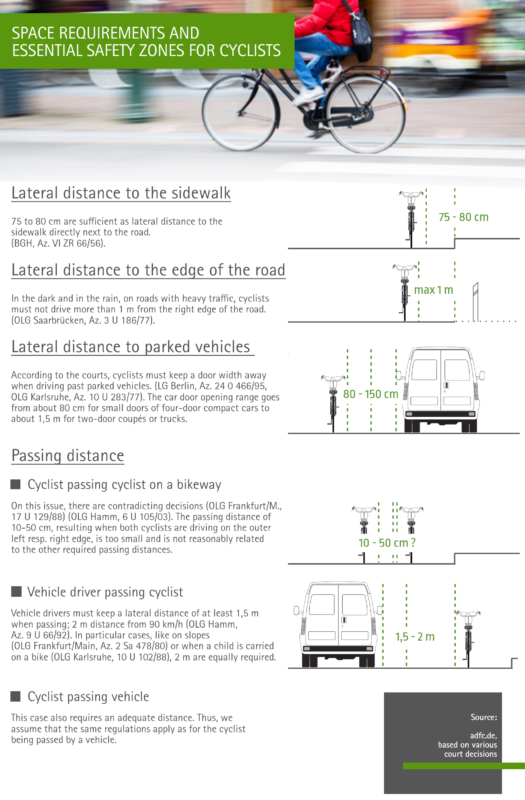 In municipalities short of money, the high investment costs are speaking against the implementation of their own bikeways. The safest option – a structurally separate lane – involves extensive reconstruction measures.
But less expensive alternatives are also able to reinforce cycling and improve the general safety for cyclists. This includes, for example, highlighting the bikeway with a continuous color marking. Opposed to a simple visual separation by a broken white line, this variant is more perceptible – also for other road users. This not only reinforces the perception of an autonomous bikeway, but the orientation along the lane is improved for the cyclists themselves.

Pros and cons of the expansion of bikeway infrastructures

An autonomous and structurally separate bikeway offers a high degree of safety and protection, especially for insecure cyclists.

Cyclists take up much less space in traffic. A well-developed cycling infrastructure can reduce the global volume of traffic.

Especially on short distances up to three kilometers there is not only great potential but also the need to shift motorized private transport to other alternatives.

Municipalities struggling with high levels of particulate pollution can counteract this problem with a higher proportion of bicycle traffic.

A good cycling infrastructure creates a bike-friendly climate and thus promotes the switch from car to bike.

The particularly safe variant of a structurally separate bikeway is very expensive.

A bikeway is not always the best individual solution. Sometimes, other concepts are better suited.

Formerly privileged road users may have to give some ground – for example, when car lanes disappear in favor of bikeways.

In cities with a pronounced hilly landscape, a noticeable increase of conventional bicycle traffic is not to be expected, even with a good bikeway network. In this case, expanding the public transport may be more reasonable.

It takes some time to determine whether the bikeways are actually used to a relevant extent.

The lack of space often rules out the creation of separate bikeway facilities.

Bikeways are often considered as the ultimate and universal solution for reinforcing inner-city bicycle traffic. But they are just one of the possible options. The multiple danger zones, the structural requirements, and the individual points of criticism on bikeways are arguments for thinking about alternatives.

Reality shows that each city and a number of traffic situations have to be examined individually. The list of ways to improve the cycling infrastructure is long. Individual solutions may be necessary.

Innovative solutions under the microscope

Some cities or metropolises already have a significant bicycle traffic share in their global traffic. It is where we can find innovative approaches and positive examples of further structural measures. There are suitable solutions for every cycling infrastructure challenge, and some cities are already trying them out:

In the city traffic, cyclists have several advantages: unlike car drivers they can park their vehicle for a short stop in front of a shop. The tiresome search for a parking spot is no longer necessary, the distances are short. However, with a larger number of bicycles, traffic can also get crowded, especially in heavily frequented places. Hence, further infrastructural expansions are still necessary for a functioning bicycle traffic.

At important traffic hubs or locations with an important infrastructure, there is not only a need for car parking lots, but also for adequate bike parking facilities. Lampposts, posts, railings and even house walls are rapidly occupied which creates a chaotic overall picture. Insufficient storage space is also a handling challenge. All of this keeps people from cycling. 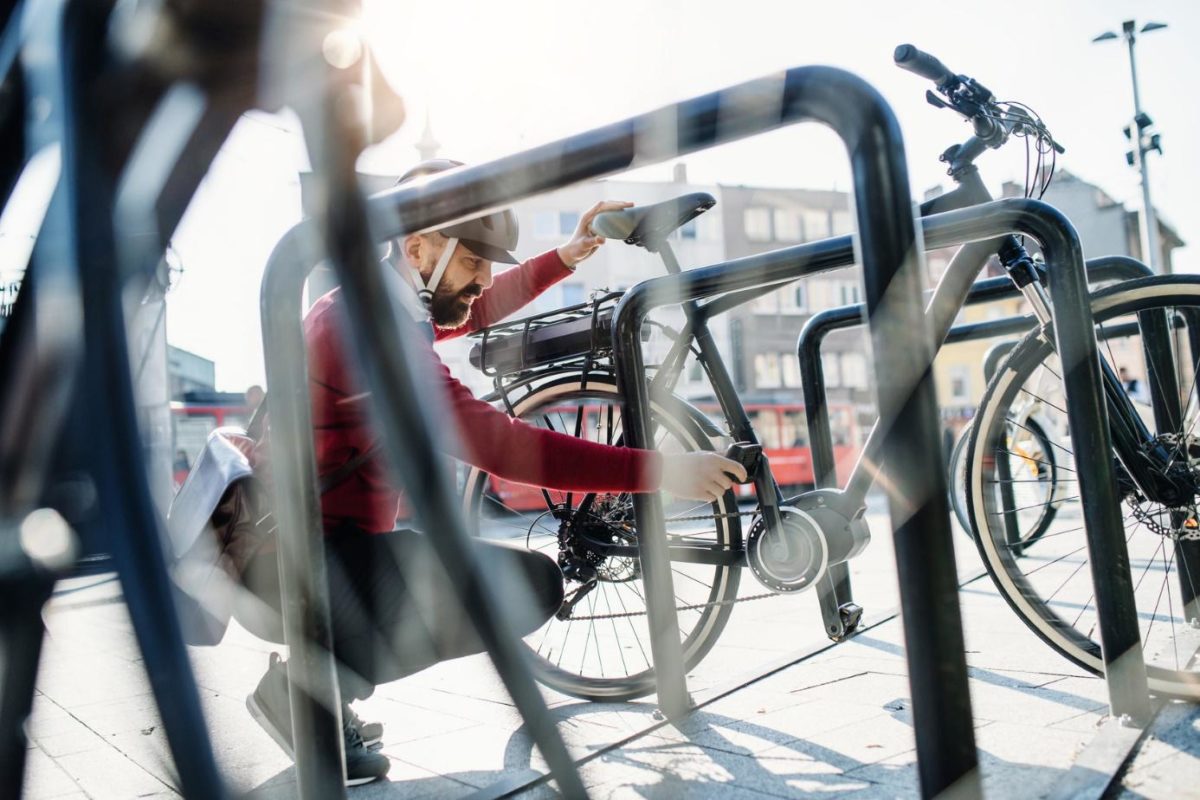 Simple support systems and bike racks should at least provide the ability to attach a bike securely. A roof provides additional protection against rain. In public spaces, on the roadside, special zones with appropriate markings on the ground can be installed as parking areas or fixed supports. Lockable parking boxes or guarded parking facilities offer even more comfort and security.
The ADFC (Allgemeiner Deutscher Fahrrad-Club e.V) has developed its own catalog of requirements for bicycle parking systems with regard to safety and usability. Models that meet the requirements are recommended by the ADFC and have been awarded a corresponding certificate.

To promote and support electromobility also for ​​two-wheelers, e-bike charging points can be set up at central locations. However, the various technical systems pose a challenge here.
Simple 230 volt sockets (AC charging with external charger) should at least be protected from the weather and provide a way to secure the bike with a lock. This is not the case for every solution.
In the case of the so-called energy-bus standard or the bike-energy system (DC charging), the battery is charged via a special secured connection.

If the battery is removed from the bike for charging, lockable boxes with a corresponding electrical connection provide adequate protection and security. Additional lockers on the loading and storage facilities can also be used to store helmets or panniers.

Municipalities have to find out about the various options. If necessary, the system providers can take on the expansion of the infrastructure.