A little history (of success) of concrete

We are walking on it, we are standing on it. We are driving on it from A to B, from country to country, from town to town, to our workplace and back home. Underground, it conveys our sewage towards the purification plants; above ground, we are living in it. In times of war, it protects our lives; in times of peace, it is a driving force of the construction industry. It can be colored, stacked, buried, embedded; it can be found in the highest altitudes and in the deepest depths. And with all its amazing characteristics, it is at the same time so unobtrusive that we don’t notice it in everyday life.

We are talking, of course, about concrete. A construction material with an impact on us and our lives like no other. Concrete goes along with modern mankind wherever you go.
Reason enough to take a closer look on concrete, its characteristics, and its history.

The early days
When in Europe most of life was still buried under a thick layer of ice, in the East of present-day Turkey, the success story of concrete began. About 14.000 years ago – in the midst of the last Ice Age – clever craftsmen in present-day Anatolia figured out that lime, brick dust or so-called pozzolan can be combined into a mixture with a noticeably significant binding strength. With some experimenting (mankind has always been inquisitive) over a few centuries, the initial mixture got further optimized and refined, until the invention of mortarium. This latin word (roughly translated: burnt lime) already implies the modern form of the word we still know and use today: mortar. 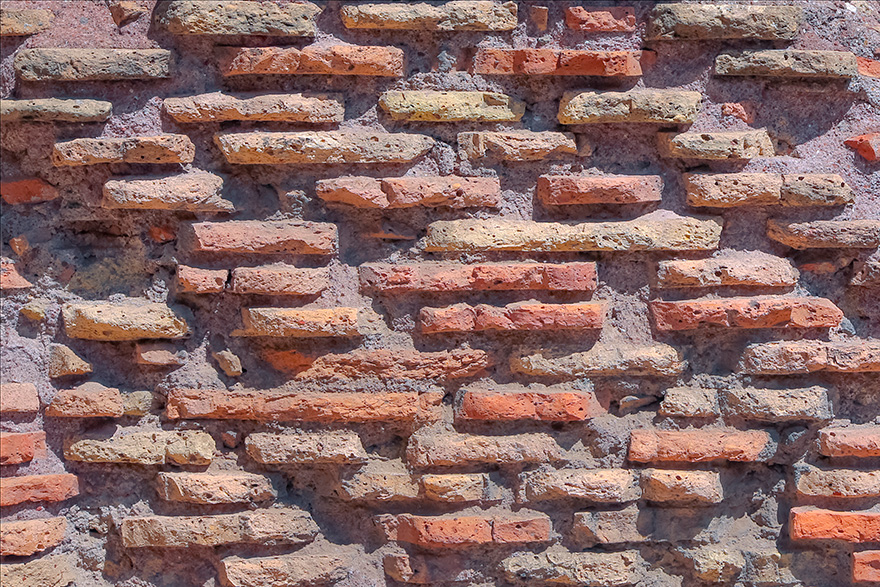 Craftsmen of the early days already used mortar to put up bricks. And whoever has visited an archaeological dig site knows that even today, thousands of years later, historical ancient mortar hasn’t lost any of its binding strength. By the way, mortar differs from the construction material we consider today as concrete by one tiny detail: mortar only contains aggregate with a grain size up to 4 mm – while in concrete, coarser stones, such as gravel, can be admixed.

Innovation from the Levant
A few thousand years later, around 3000 B.C., mortar was improved for the first time. In Phoenicia, located in present-day Lebanon, Syria, and Israel, an innovation took place that is best explained with the then culture. The Phoenicians were a nation strongly specialized in trade and seafaring. The individual city-states of the Phoenician realm were involved in the then strong and thriving Mediterranean trade, established branches all around the Mediterranean Sea – and forcibly came into contact with active volcanoes. And what does a seafaring nation do, upon coming across abundant volcanic rocks on its settlement? Of course, the two elements fire and water had to be combined. Thus, the Phoenicians took the plentiful volcanic rocks, admixed them with their familiar mortar – and incidentally created a material able to harden under water. On that note, the basis for modern port construction was created.

Greeks and Romans
Ancient Greece did not only bestow the most tragic dramas, the funniest comedies, the Olympic Games, and the Marathon upon us – but also modern concrete. The Ancient Greeks maintained close ties to the Phoenicians, and thus brought their knowledge and their techniques to the European mainland. Around the third century B.C., the Romans took up the mortar techniques and developed them consistently. In the first century A.D., the production of pressure-resistant construction components made of waterproof mortar and rocks saw a breakthrough. The admixture called opus caementium became the foundation of almost the entire Roman architecture. Temples, sewers, theaters, roads, bridges, tunnels, and houses, obviously: there wasn’t hardly any architectural challenge that the Ancient Romans didn’t take up with concrete. The reliability and durability of this type of concrete can still be marveled at today, almost 2.000 years later. A true masterpiece. 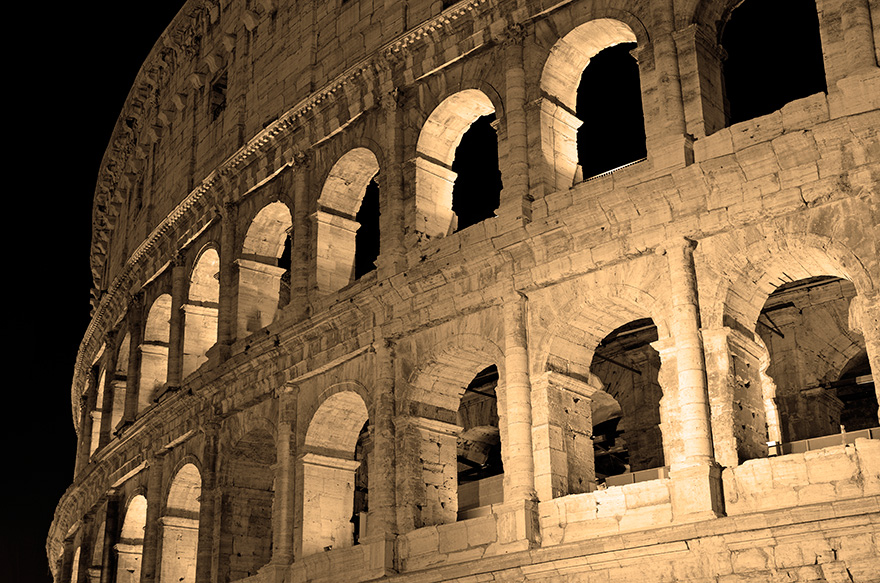 The Middle Ages
Like many other cultural techniques, the knowledge of concrete was lost after the fall of the Roman Empire. It is not without reason that the period between the 4th century A.D. and the year 1400 is called “The Dark Ages”. Concrete suffered the same fate at that time. During the times of migration, superstition, and constant warfare, the amazing construction material simply fell into oblivion.

Rediscovery
During the Renaissance – which translates as “rebirth” – people vigorously busied themselves with ancient and forgotten cultural techniques. Artists, poets, thinkers, and rulers rediscovered the past and developed the old ideas. This was also true for craftsmanship. There is no evidence when and where exactly concrete was brought out of the shadows. However, one thing is for sure: only the continuous improvements and optimizations by our ancestors have made the world, as we know it today, possible.

Industrialization
With the emergence of the first machines in the early 19th century, concrete started its ultimate victory lap. Around 1804, the first prefabricated concrete parts were produced in France. Exactly 40 years later, I. C. Johnson from Great Britain developed the Portland cement, still in use today. This cement consists of a mixture of clay and lime, brought to melt and thus to sinter. This “modern” cement is, to this day, still used as an admixture and binder in concrete. Another method still in use was discovered in France, a few years later, in 1867. Smart gardener Joseph Monier didn’t want to sell simple flower boxes to his clients: they had to be really strong flower boxes. Without further ado, he combined steel mesh (“rebar”) with concrete, and thus incidentally created the basis for one of the most robust and everlasting construction materials of our times: reinforced concrete. 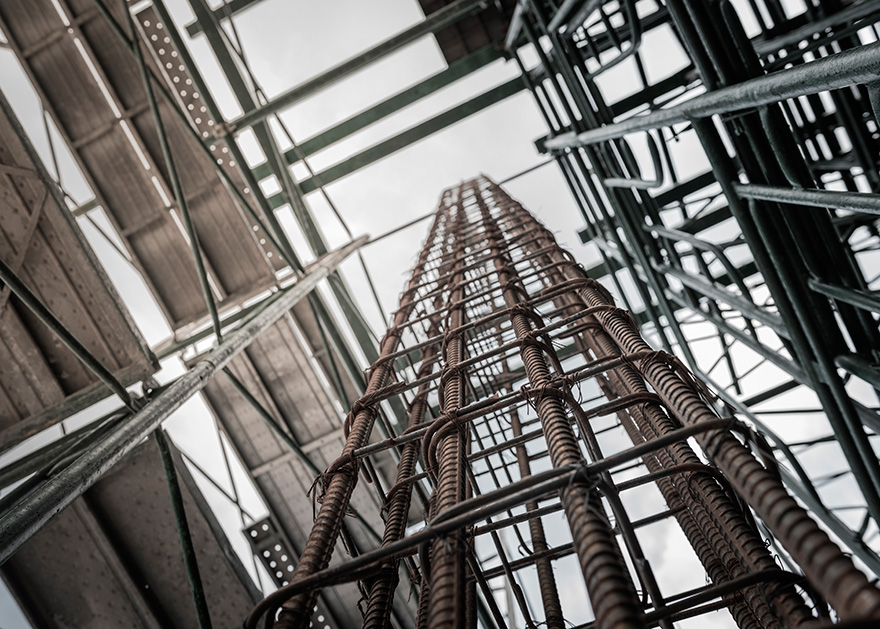 Concrete in the modern era
In 1902, Cincinnati, Ohio saw the construction of the first high-rise building with reinforced concrete. The sixteen stories high Ingalls Building was built in a mere eight months, covers an area of 15 x 30 meters, and is as much as 64 meters tall. It goes without saying that the building is still standing today, unfazed by the test of time.

One year later, contractor Jürgen Hinrich Magens raised the question, if and how finished concrete could be stored over a longer period. How convenient it would be to prepare concrete in factories, and then have it conveyed, ready-to-use, to the building sites! Magens developed a procedure for the rapid cooling of concrete and had it patented that same year – the “ready-mixed concrete” was born. The procedure had been developed, the ready-mixed concrete was good to go but for an appropriate production plant. Here again, Magens proved to be a pioneer and founded the first ready-mixed concrete factory worldwide.

With the ongoing mobilization of the masses, the need for roads designed for automobiles increased in the 1920s. The first concreted roads, with a then still thin and short-lived concrete surface, were built in the USA. The early issues led to a continuous enhancement of concrete roads. The first concrete road with surface reinforcement, where the newly developed spot-welded wire meshes came into play, was built in 1929, in Germany.

With the start of World War 2, the innovativeness in the concrete field shriveled. While the war raged on, concrete was mainly used for the construction of bunkers and bunker complexes. These legacies and silent witnesses of dark times can still be visited along the Atlantic coast (the so-called Atlantic Wall), or as high-rise bunkers in our cities.

After the end of the war, the concrete industry regained momentum. West Germany’s first modern prestressed concrete bridge was built in Heilbronn in 1948; as of 1954, countless ready-mixed concrete factories emerged in the USA, and later in Europe, and took over 50 % of the global cement production.

As of the late 1970s, concrete, the age-old construction material, experienced another revolution. In Germany, easy to process high-strength fiber-reinforced concrete was employed for the first time in 1978. This type of concrete cannot only be cased but also pumped or sprayed which, of course, considerably shortens the construction time. 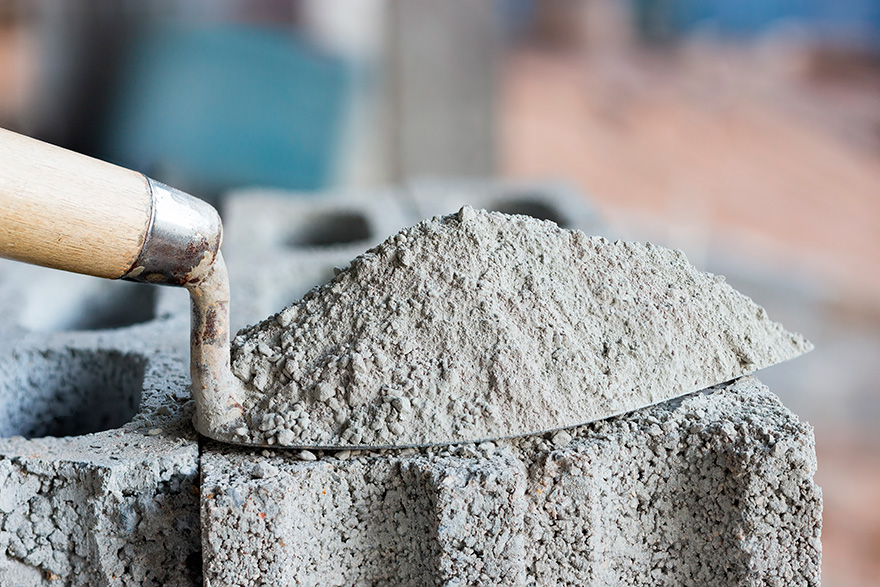 And today?
Concrete is still a mixture of various main ingredients, but is, more than ever, far from the construction material of our ancestors. Developments like self-consolidating concrete, deaerating on its own through gravitational force and featuring ideal fluid properties, shorten construction times continuously and allow the use of the construction material in most, if not all, domains. In recent material development, translucent concrete certainly is one of the most intriguing. The times when concrete was said to be a visually heavy construction material are gone! Translucent concrete is produced by embedding optical fibers, achieving high light transmission. As the optical fibers conduct light almost without loss, shadows and colors can be perceived through the concrete – even in the case of a significant wall thickness. Thanks to modern concrete variations, there are no more limits to the creativity of architects and city planners.

The future
It goes without saying that the development of concrete is far from being complete. Marine biologist Hendrik Jonkers, for example, is currently working on the combination of concrete and bionics. The admixing of bacteria spores with concrete is to create a self-healing concrete, able to repair cracks and spallings on its own. Whereas another research team at the University of Duisburg-Essen has invented a concrete that is both insulating and strong to a high degree. In the future, this so-called aerogel concrete is to be used for single-shell walls without additional thermal insulation. Current tests with carbon or plastic, as additives, are also very promising, making us without a doubt looking forward what else the future will hold for the age-old construction material.